For 30 days, Daybreakers’ impressive commitment to eating quality foods in the correct quantities, as well as increased water consumption, increased sleep and consistently working out, made for amazing results. Members reported better energy, better sleep, and increased workout performances. Some members lost weight (intentional or unintentional), and others said their clothes fit better.

Below we have highlighted members from both gyms. These members ranked in the top 5 for points over the course of the challenge. They are sharing their results, overall experience, tips to staying consistent, and what they’ll continue/stop post challenge.

JANICE
Janice came in first place with 278 points! Janice lost 12 pounds, and reported that the waist and legs of her jeans are loose, and clothes are fitting better overall.  Janice went from sleeping 3-4 hours per night, and not being able to fall asleep until 1-2am, to sleeping 7 hours per night and getting in bed by 10pm. She contributes her success to increased water intake! She said the more water she drank the more energy she had but it also kept her satisfied at meals. Janice says this is only the beginning and will continue with the challenge guidelines!

JOHN E
Came in second with 273 points! John lost 12 pounds and went down 4 belt loops. John says he has tons of energy, is feeling stronger, sleeps well, and isn’t hungry. He contributes his success to GIANT (mixing bowl size) salads at lunch. John says he has found what works for him. He found a balance (1-2 treats per week) that he plans to continue with no end in sight.

DUSTY
Placed third with 261 points! Dusty said he ate pretty much the same foods as recommended on the challenge, but with a new focus on portion control and sleep. More sleep, the right portions and a few less IPA’s, Dusty unintentionally lost 8-10 pounds, and has felt mentally clearer. Dusty plans to continue the challenge especially the 7+ hours of sleep. As far as food, Dusty said he’d add in more starch to maintain weight.

TIM
This was Tim’s first challenge with Daybreak! He earned 259 points, lost 5 pounds and feels like burpees and running are easier. A big change for Tim was adding more carbohydrates and water which he found gave him crazy energy. His go-to breakfast was spinach and tomatoes, with an egg and oatmeal which kept him on track but also satisfied.

KATIE
Katie earned 248 points, lost 4.5 pounds and her SPANDEX pants are falling off! In the past, Katie hasn’t allowed herself a “treat” like sugar or alcohol over the challenge period. This time, Katie had a couple a treat or two on a weekend, and found that kept her happy but also motivated for the weeks to come. She said “I’ve found what works for me”. And that’s what these challenges are all about, finding what works!

MATTHEW
Matthew won the challenge with 353 points (that’s only 7 points below a perfect score!) He also Lost 14 pounds, PR’d his front squat (hit it for a triple) by 40#s, and connected bar muscle ups on skinny bands. Matthew found it easy to measure portions based on eyeballing your hand and will continue to use this method moving forward. His biggest realization was he was overdoing his fat intake. Moving forward, Matthew will have the occasional treat and add back fruit after dinner. Over the last two years at Daybreak, Matthew has lost 50 pounds!

MARY D
Mary came in second place with 305 points. Over the quarantine, Mary said she developed a sugar habit that she couldn’t quite kick. During the challenge Mary was able to break the habit and lost 6 pounds. Mary like not only focusing on nutrition, but on water, sleep and exercise! Mary, along with Susan and Kelly are continuing the challenge from now until December 23rd, who else wants to join?

SUSAN
Susan earned a total of 297 points, and lost 3.5 pounds and 3.5 inches! Susan found eating quality foods gave her confidence throughout, and at the end, of every day.  Susan swears by smoothies to keep her on track. The biggest win for Susan was her overall cholesterol decreased!! Susan said the combination of an all vegan diet, exercise, and the challenge, lead to this milestone. Susan reports she has more energy and will continue with Mary and Kelly for another month at least.

LIZ
Liz earned 273 points, and is feeling more energized especially in the afternoons when she tended to feel sluggish. Biggest realization for Liz was she was eating too much fat (with contributed to her sluggishness), and she plans to keep the eyeballing portion method moving forward. Liz also liked that she could earn points from sleep, water and exercise, which gave her alternative focuses outside of just nutrition.

TACY
Tacy earned 260 points! Tacy focused on increasing her sleep from 8 to 9 hours, and included more meditating/journaling and less screen time. Tacy said that she’s feeling much stronger! Not only has she PR’d most of her lifts, she’s feeling much faster!

Click here to see our schedule for our FREE monthly seminars designed to help you WOD better, move better, and recover better. 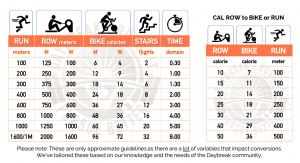 Adjusted schedule and class reservations can be found here on our COVID19 INFO page.